Posted on June 5, 2018 in In the Media
Source: http://www.cbc.ca/news/canada/saskatoon/bike-lanes-saskatoon-downtown-cycling-1.4689933

City staff present their suggested downtown bike lane network during a public meeting above a bike shop on May 28. (Bridge City Bicycle Co-op/Facebook)

The same downtown streets whose temporary bike lanes have drawn criticism are now part of a larger downtown cycling network the City of Saskatoon is expected to recommend later this month.

Bike lanes were installed on 23rd Street and 4th Avenue as a pilot project in 2015 and 2016, respectively. But the lanes have since been criticized as being poorly designed and an impediment to people who want to park on the streets.

City councillors asked the city last November go back to the drawing board. The temporary bike lanes stayed put in the meantime.

But 4th Avenue and 23rd Street remain a core part of the downtown bike lane network that councillors will be asked to endorse at a public meeting on June 20. 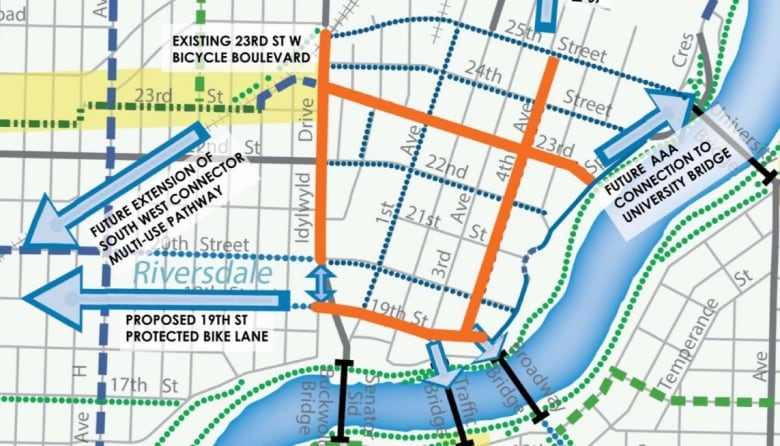 4th Avenue, 23rd Street and parts of 19th Street and Idylwyld would have dedicated bike planes under the plan. (City of Saskatoon )

“We don’t mean walking away with what we have. We mean tearing it out and starting over again,” Marina Melchiorre, a senior transportation engineer, said of the demonstration lanes at a public meeting last week.

Parts of Idylwyld Drive and 19th Street would also have dedicated bike lanes, according to the plan.

The city looked at other north-south and east-west downtown streets for the network, but 4th Avenue and 23rd Street still came out on top in terms of their impact on parking, vehicle travel time and whether or not they would fall on the same route of the planned bus-rapid-transit (BRT) network. (Neither street would.)

Fourth Avenue currently has 152 parking spots, according to a table from the city. Adding bike lanes appropriate for people of all ages and reducing the street to two lanes (with left turn bays) would bring the number of parking spots down to 94.

Adding bike lanes to two-lane 2nd Avenue, by contrast, would bring the number of parking spots to 146 from 322 — a greater decrease than on 4th Avenue.

“The world didn’t end,” said Melchiorre of the demonstration lanes. “Parking did become a little more difficult. But not that bad.”

‘Did not spend enough’

The city is aware not everyone is a fan of the temporary lanes on those streets, said Melchiorre.

“We did not spend enough money,”  she said, going on to compare Saskatoon’s demonstration project to Calgary’s cycle track pilot project

Keith Moen, executive director of the North Saskatoon Business Association, said the city’s plan is unclear and may not be the ‘best way to proceed.’

“If the protected bike lanes that were present on 4th Avenue persist, it seems like doubling the failed demonstration onto another two streets is just doubling down on a failure. The best solution in our mind would be to have one that doesn’t restrict parking or traffic flow,” he said.

Lanes for the ‘timid’

Cathy Watts, a member of the biking advocacy group Saskatoon Cycles, said the city should be devoting one per cent of its transportation budget to cycling.

The June 20 meeting is only for deciding which streets will form the downtown network, to help with planning for the future BRT network.

Exactly what the bike lanes on each street will look like would be ironed out later, though the idea is to design them even for the “timid” cyclist, said Melchiorre.

Two potential examples include a one-way raised cycle track like the one recently installed on the section of Victoria Avenue south of the new Traffic Bridge….

….and a bi-directional bike lane on only one side of street. 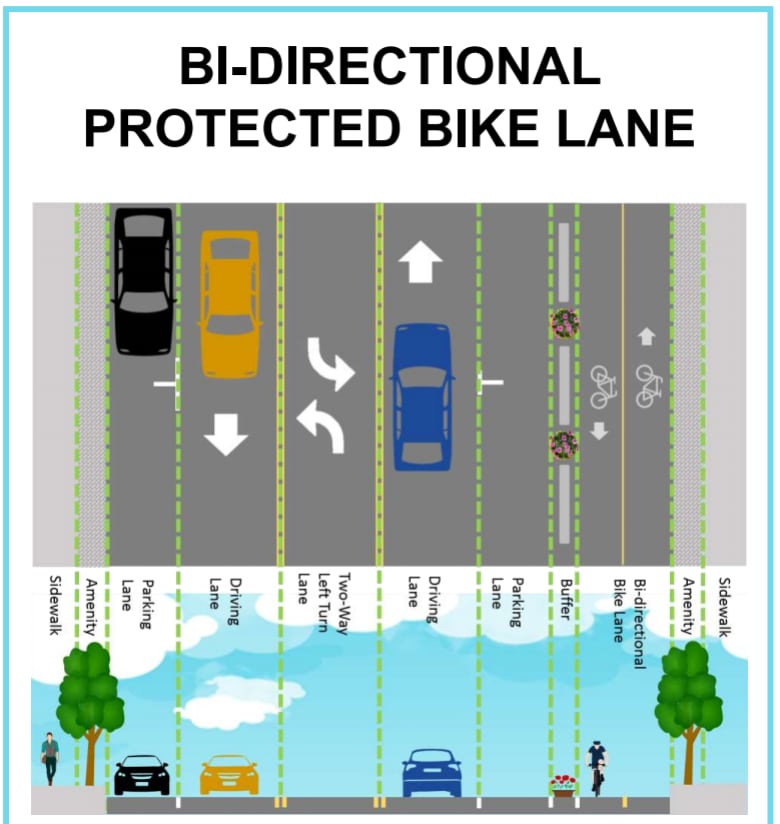 The June 20 meeting at city hall is open to the public and begins at 1 p.m. CST.